HEMSWORTH GRAMMAR SCHOOL 1921-67
Emails Index 2022
This section contain emails from the first few years of the website's life.
Thanks to everyone for getting in touch.
Dave 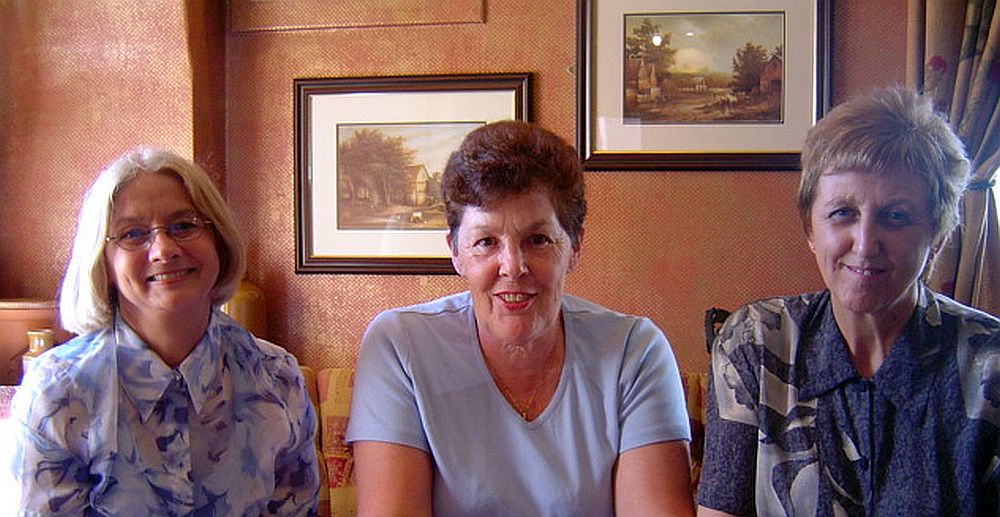 Some of our very first emails were sent by these ladies.
L-R: Gail, Daphne and Sheila.
The ideas came forward. Thank you.
This site is not just a list of historical facts and figures. It is a contact point for Hilmians of every generation to “touch base”.  The emails we have received since 2001 show this. It is a project that can never be considered to be complete. There are always new memories to publish and more artefacts to discover. In the early days we were quite prepared to let the idea quietly fizzle out if no interest was shown, but we have been overwhelmed by the positive response to our requests for memories and memorabilia. Hilmians from all over the world have ‘checked in’; friendships re-established, and new friends made. We use technology to bridge the gap between our physical locations. Dave is the technical wizard, and the pleasant task of contacting Hilmians falls mainly to me. ​
Sheila Kelsall
Emails 1 (23 contacts from 2001-2002)
Emails 2 (22 contacts from 2002)
Emails 3 (18 contacts from 2002)
Emails 4 (12 contacts from 2002- 2003)
Quotes from some of our Visitors' emails

"We're doing our best to gather the memories of HGS before they fade completely. Along the way, we are finding that many friendships have been renewed, and those who are abroad are appreciating the renewal of links with home."
Sheila Kelsall (1955-62) UK

"The web site is so memory provoking and a real gem for those of us far away."
Celia Asher (1943-50) Canada

"We get in touch for the best of reasons - to say hello, how are you, how has life treated you? A network of friendship, which can only be good."
Dee Tyrrell (1955-61) UK

"When I write about HGS, I just cannot remain objective. That school was the single, most important feature in shaping what I became in so many ways. What is more, my regard for it and its place in an educational era have been enhanced by time not diminished. The awful thing is that by the time I became an adult and had my own children, I had a deep rooted conviction that the avante garde educationalists were wrecking a precious system. Nothing has changed that view and I still recall the pain I felt as my kids had to attend a Comprehensive of 1200/1300 pupils in the early 1970's. You see, I know what a desert their years there would be whilst my own secondary education had been spent in a glorious garden. How sad that forty years went by before Governments seem to be trying to resurrect something that sounds like the same kind of system though under a different, less socially provocative set of titles."
Geoff Graham (1949-55) UK

"I think it would be a great shame if HGS were allowed to disappear into the mists of time."
Dave McKenzie (1955-62) UK

"I started Hemsworth Grammar in 1927 and left in 1933. I was in the school choir and a prefect, and thoroughly enjoyed my days there. I'll never forget the day I opened that green door in the stone wall and looked into what looked like heaven after Grimethorpe Primary!"
Eileen Morley (1927-33) Australia

"It was great to see the site as I have lived in New Zealand for 30 yrs and lost touch with everybody."
John Blake (1956-61) New Zealand

"Hey, What a site. I learned about it from David Fearnside who e-mailed me here in Ireland from Hong Kong...such is e-life these days."
Andrew Hudson (1958-65) Ireland

"My first look at the site brought all the old memories flooding back to me - some good, some bad, but all of them precious."
Phil Wilkinson (1963-69) UK

"I only have good memories of the school. Even a couple of visits to the Head's office for the requisite number of swats with his cane don't seem as bad as they once did."
Roy Mason (1952-56) Australia

"I was appalled when I went back the first time and saw that the beautiful old hall frontage had been blocked out by a most unsympathetic building."
Leighton Smith (1945-50) Australia

"It was great to find the link to the web site from Friends Reunited. Stepping back through your pages reminded me of numerous school chums."
Peter Miller (1957-61) UK

"I stumbled across the website while trying out the merits of the Google search engine. What a wonderful surprise. I thank you for keeping a precious place in the forefront of our memories."
Allan Berry (1964-70) USA

"The Prefects' Pledge tells of a place called school that is so particularly and peculiarly, so quintessentially, British."
Jean Snookes (1950-57) USA

"I attended Hemsworth in its last year before the changeover. It wasn't until later that I realised just what had been lost."
Brian Hardaker (1967-71) Germany

"The photographs and the reminiscences from former school mates and acquaintances, certainly rekindle memories and voices from the past, leaving warm feelings and appreciation of all that was best at H.G.S. Happy days!"
Sid Kenningham (1950-59) UK

"The class photos are amazing for the way they bring back so many happy memories."
Dave Biggs (1958-65) Barbados

"Congratulations for keeping the best grammar school in Yorkshire alive. It was a good education to deal with life ahead of us."
Irene Wright (1944-51) UK

"It is good to read about contemporaries who are still "going strong". Thank you for the effort that has been put/is being put into the website. I hope that it goes from strength to strength!"
Melvyn Wheatcroft (1949-57) NZ

"I have very happy memories of my time at H.G.S. Grew in confidence, made many friends, and I am sure it was the school and it's influence which led me into my career as a Secondary School Teacher."
Howard Peel (1949-57) NZ

"Looking at the website has brought back a lot of memories. I recognise some of the faces in some photos and seeing names has also jogged my memory."
Jenny Cocksedge (1961-65) UK

"Phone line blocked for most of the day, tiling the bathroom not completed, forgot to get the shopping, various other jobs not completed and all because I discovered your simply wonderful website!"
Allan Skelton (1959-64) UK

"The amazing website evoked memories of long summer lunchtime breaks on the playing fields when nobody bothered to ring the bell!"
John Harrow (1957-62) UK

"The strains of the school song are now drifting out through my open office window and to the buildings beyond. You might ask why this is worth a mention - well one of the buildings happens to be the Colosseo; another is the Forum and in the distance is the Vaticano."
Derek Burkinshaw (1968-71) Italy

"The website has given me hours of interesting and nostalgic experiences. I have seen pictures and names which I must admit to having almost forgotten."
Alan Barker (1955-60) UK

"So many happy memories. This school was instrumental in my going to college (the first in the family). I am forever grateful."
Colin Lowery (1961-68) USA

"I enjoy trawling through the web site. It's amazing how many names come flooding back after all these years."
Peta Adams (1956-64) UK

"Cynthia Hodge passed on the web address to me just before Christmas, and I have been hooked ever since. It is a fantastic site and has brought back so many memories."
Jacqueline Leonard (1954-62) UK

"How quickly we all grew up from those days of short trousers! HGS was something special, not least due to the dedicated teaching staff whose patience I for one often tried."
Paul Creighton (1957-62) UK

"Thanks for a most evocative site. A lot of memories came flooding back. I was stunned to see my "words of wisdom" about the Esperanto club appear on the Internet after a lapse of over 40 years."
Rod Foster (1961-68) UK

"Congratulations on the Web Site! I was amazed to come across this when idly browsing Google one wet afternoon. I was saddened to learn that HGS became defunct many years ago."
David Weston (1954-59) New Zealand