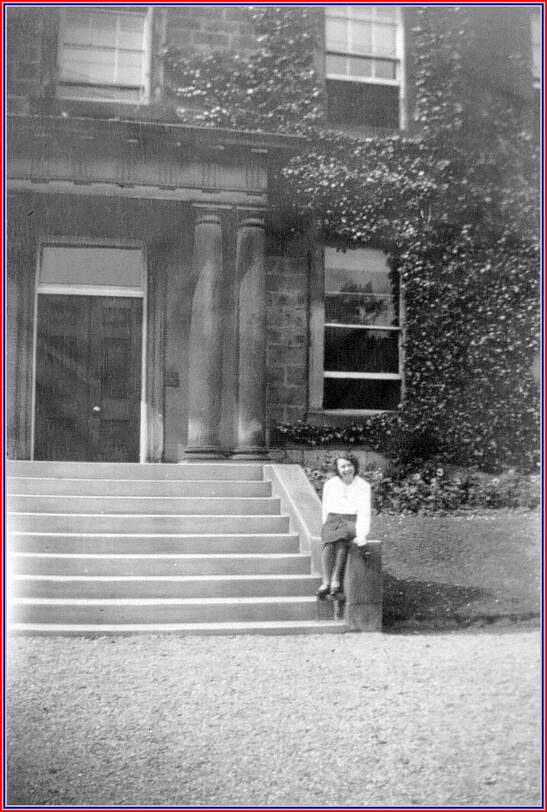 This photograph was taken in 1925 and shows Grace Mills enjoying the quiet at the end of the school day.
I met Grace in 2002 and she recited the Prefects' Pledge perfectly. (Dave)
Hard times
Grace Kaye (nee Mills) told this story to her son Peter Kaye (HGS 1955-62).
Before getting a scholarship to Hemsworth (and I think this was to join Year 2 in 1926), Mum had spent a year at the Girls' School at Moorthorpe. There the uniform was green. The transfer to Hemsworth meant a change of uniform colour - and there was no way that her family could afford to buy new items. The Miners' Strike produced great hardship for local families. So Grace and her mother dyed the green uniform. Alas it came out black! My mother felt so ashamed at the first assembly - and Miss Griffiths told her to stay behind. Mother, close to tears, explained why her uniform did not conform. "You silly girl", said Miss Griffiths. "There is a special fund to help!" Mother was taken to a local shop and the navy uniform was provided!
From the School Magazine Editorial 1948
"We are reaching the end of the small, intimate Grammar School which was known so well by countless of those hundreds who gave us these traditions. We owe it to them to close this era in the history of Hemsworth Grammar School in such a burst of energy and co-operation as has never before been surpassed." ​
Which means:
Look to it, you slackers! If everyone would pull his weight in work and play; take part in all School activities; rely on himself more and not wait to be chivvied around, the School would gain an atmosphere and reputation second to none.
An extract from the 1948 Hilmians Presidential Address from Mr Hamilton
"The School has changed much since the year 1939. The main building is still as it was: the grounds are still as they were. But we now teach in the Technical School, and in the Dining Room. Four new classrooms to take the place of the Technical School rooms and the Dining Room are practically finished and by the time this appears in print we expect to be using the four new classrooms (The New Block). The mainspring of the School - the Staff - has changed very much indeed. There is not a single Mistress who was here in 1939. This was perhaps to be expected. Of the Masters who were here in 1939 there still remain Mr Crossland, Mr Storer, Mr Collette and Mr Manning. Twenty-five years of service at the School were completed by Mr Crossland last year – as most of the Old Hilmians know – and this year Mr Storer completes his 25 years."
Staff 1948 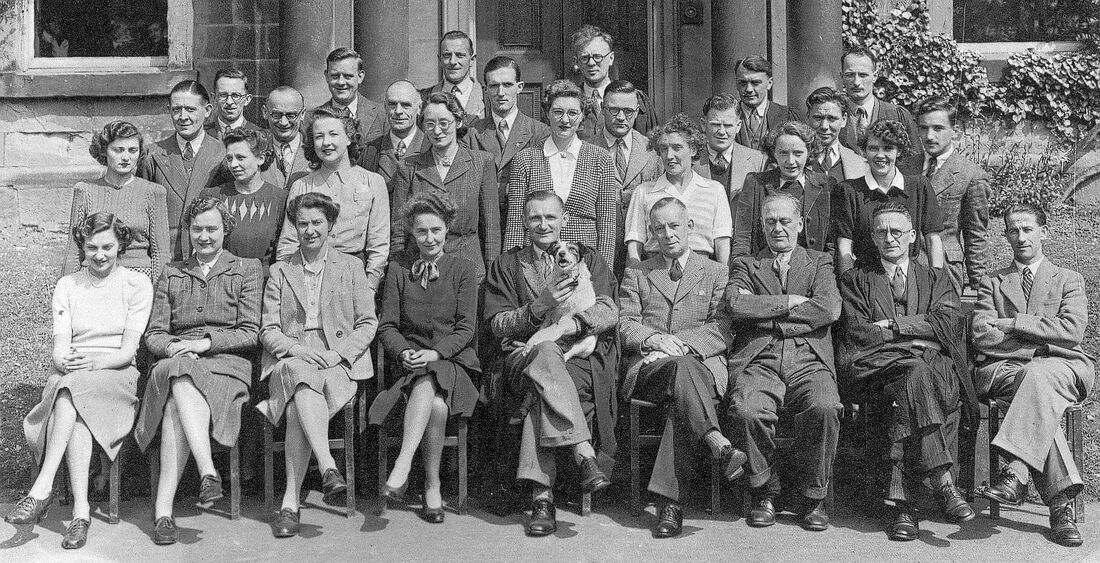 During the First World War of 1914-18, Mr. Jenkinson was away from his school in Cornwall much of the time. He had started there in 1910, and in December 1914, he joined the 24th Royal Fusiliers as a private. He later held a commission in the Royal Army Ordnance Corps, from which he was discharged in March 1919 with the rank of Major. He served two years in France and fifteen months in Italy, and throughout this war, he left behind at his school an Oxford M.A. gown hanging on a peg in the corner of his room, and his mortar board, which lay in a cupboard.

Upon his return, Mr. Jenkinson, and Miss Griffiths, the Welsh senior mistress at the school, soon recognised the academic talents of the young Rowse, and set about nurturing them, and encouraging this young pupil to consider a place at Oxford University by applying for one of the two scholarships offered by the county of Cornwall at that time. From a poor, working-class family, Rowse received no encouragement or likelihood of financial support from his parents. His father was a china clay worker, and the semi-illiterate family kept a shop in the village of Treganissey. Mr. Jenkinson introduced the young Rowse to Sir Arthur Quiller Couch, a Cornish author and man of letters who published under the pen name of Q, and who was to remain Rowse’s friend and mentor throughout his life.

While studying for his scholarship exams, Rowse was dismayed to learn that his respected headmaster had accepted a Headship at the new Hemsworth Secondary School, to begin in 1921. Mr. Jenkinson duly left Cornwall for Yorkshire, with Miss Griffiths following shortly afterwards.

Having achieved a place at Christ Church, Rowse obtained a double First in History, and was shortly afterwards elected to All Souls in 1925 where he became the first such Fellow to have a working-class background. Whilst an undergraduate, he developed a reputation for his devotion to speaking precise English. In 1929, he was awarded his Master of Arts degree, and in 1927 was appointed lecturer at Merton College, where he stayed until 1930. In 1931, he unsuccessfully contested the parliamentary seat of Penryn and Falmouth for the Labour Party, and then became a lecturer at the London School of Economics. Celebrity followed the publication of his autobiography and he made many lecture tours in the United States of America and elsewhere. This British historian was best known for his poetry about Cornwall and his work on Elizabethan England. Among many of the honours bestowed on Rowse were a fellowship of the Royal Historical Society, an honorary doctorate of the University of Exeter and the Benson Medal of the Royal Society of Literature. He was made a Companion of Honour in 1996. He died on 3rd. October, 1997 at Trenarren, St. Austell, and bequeathed his collection of books, manuscripts, diaries, and correspondence to the University of Exeter.

In 1934, Rowse was able to repay the kindness and friendship of Mr. Jenkinson by attending the Speech Day of Hemsworth Secondary School and giving an address to the gathered parents, pupils and staff at the Hemsworth Hippodrome. Mr. Jenkinson had just been appointed to the local magistrate’s bench, and was now Headmaster of an extremely successful school of 452 pupils, with four Scholarships to Universities awarded that year, and nine Higher School Certificate successes.

In a word to parents – “poor, harassed, and often worried parents,” as he described them – Rowse said the best advice he could give was to watch their children and find out what was their natural bent. It was no good trying to drive them into something not fitted for them. If the children had a talent, no pains should be spared to develop it. He stated that those who were best at examinations were not necessarily the best citizens, nor were they the worst.  Winning prizes was rather a technical affair. The important thing was to turn out good, fully developed men and women, for if the country was to come out of its difficulties (these were the ‘hungry thirties’) it needed every scrap of ability coming through the schools. This was good advice which came from the heart, and reflected his own experiences.