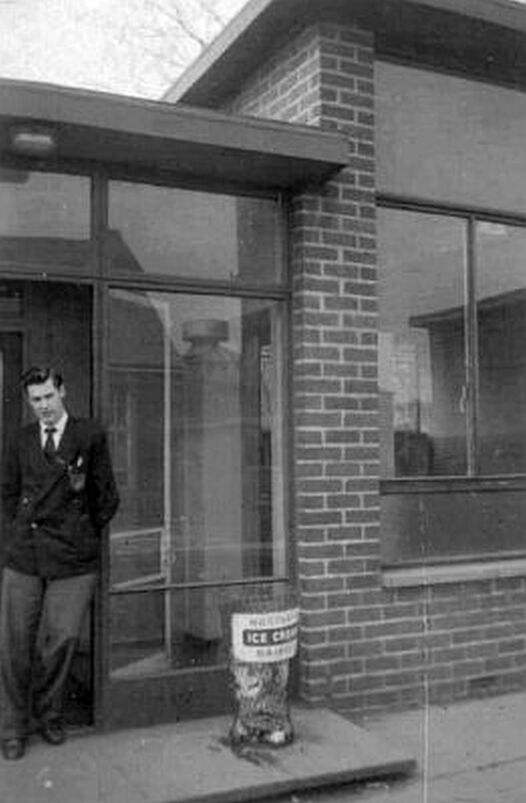 Here is the New Block's Tuck Shop. So many of us went there to purchase desired items such as ice lollipops. You had to be careful to avoid wasps in September. The photo comes from Sid Kenningham who is also shown on the photograph. Sid became the Headmaster of Kings School, Pontefract in 1985.
24. The Senior Management Team of Hemsworth Grammar School
Miss Smith joined the S.M.T. in 1946 and Mr Collette joined the S.M.T. about 1950-51. 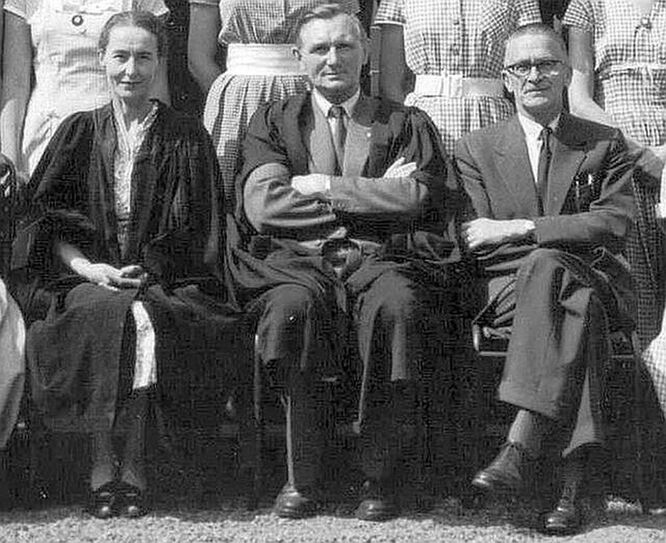 They were a powerful team keeping the school 'ship' steady to the benefit of everyone, Staff, office and technical staff. We were all grateful for their effectiveness in maintaining the ethos and conditions for learning in that tiny elite community. However it could not always remain neutral to changes in society so that when there were minor disciplinary happenings they were dealt with firmly, fairly, sensibly and with sensitivity.
Ken Sale, HGS Staff 1955-61
23. HGS win the West Riding Shield at the Huddersfield Sports in 1961 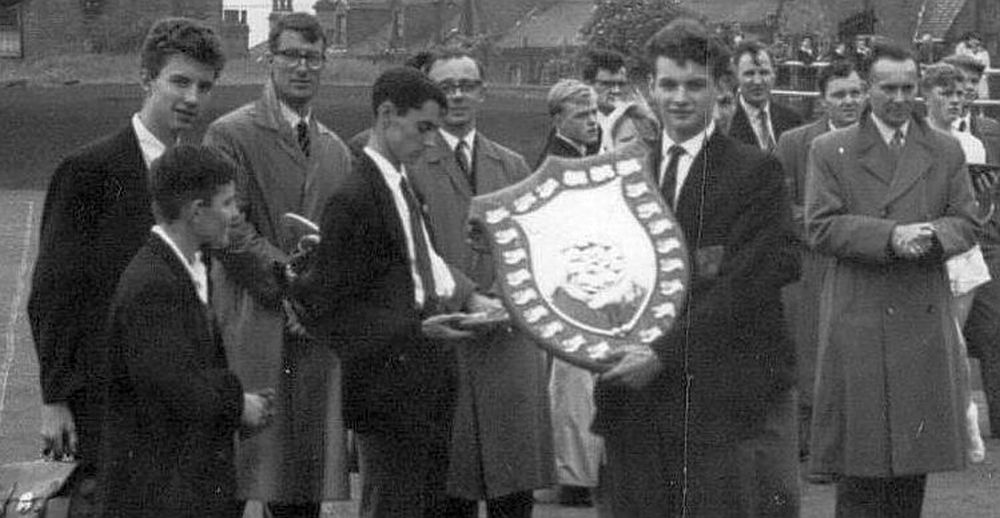 The W.R.C.C. Shield for the winning school being held by Dave McKenzie, the Athletics Captain.
It was presented to Dave, on behalf of HGS, by Derek Ibbotson the international athlete.
The HGS teachers are Mr. Tate, Mr. Jakes and Mr. Hodson. Wray Vamplew is looking at another HGS trophy. ​Neville Sutcliffe is the tall schoolboy. The boy at the front left is Steve Bristow. On the right of the photo, another winning school was presented with one of the Boys' Age Group Shields.
22. Mr Collette retires in 1965
Mr Collette joined the H.S.S. Staff in 1925. He came from Chatham and stayed in Hemsworth for all of the 40 years. 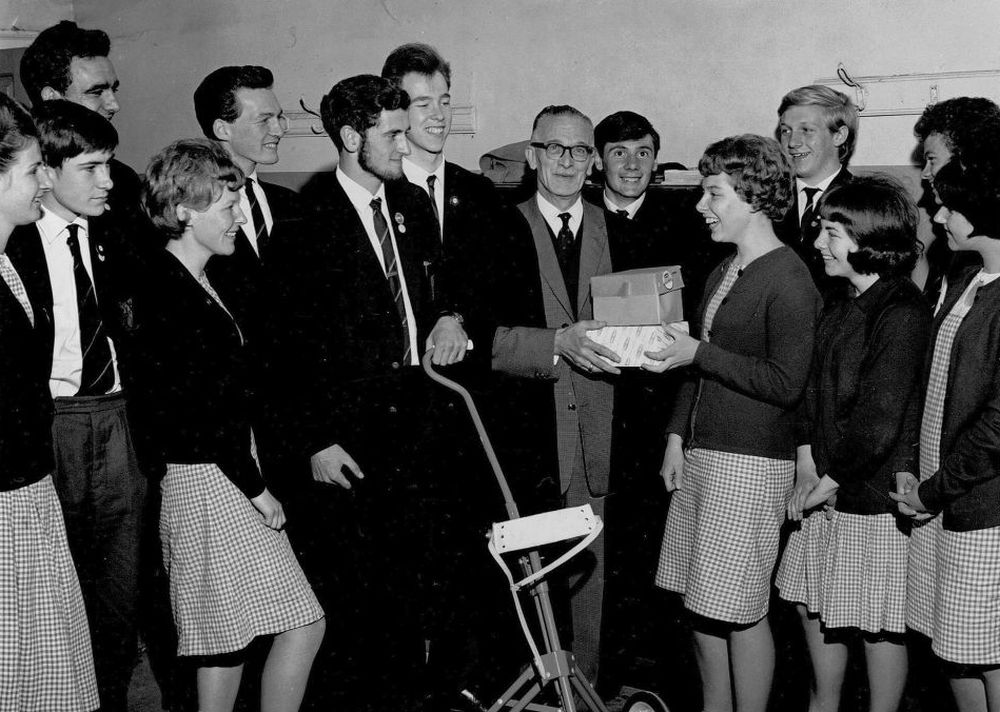 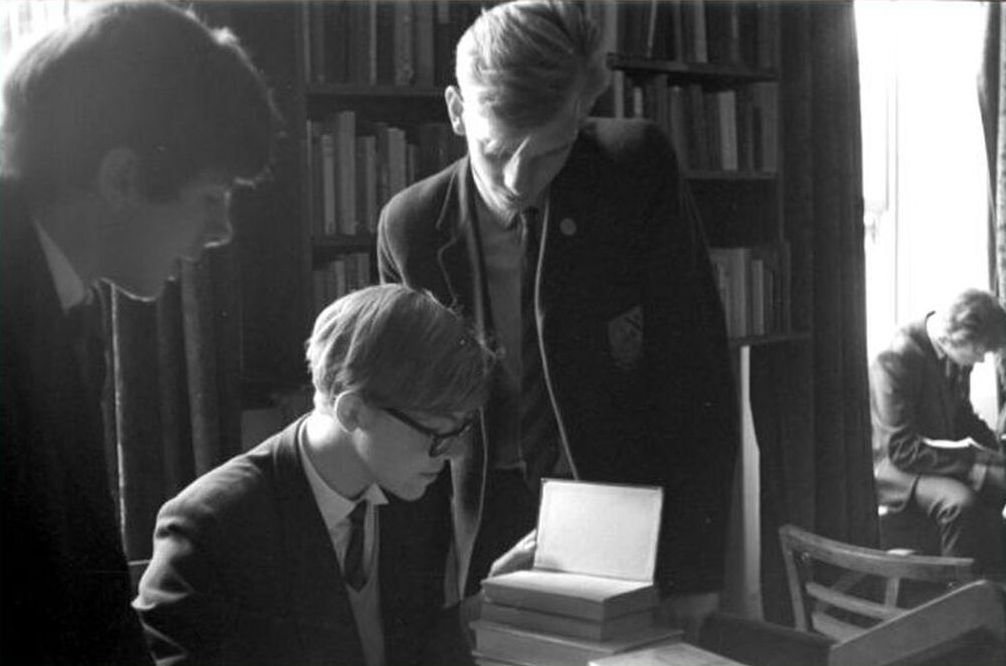 Rod Foster (centre) shows the way.
Photo: Batey
20. The Hilmians and the School say “Thank you” to Mr Tate. 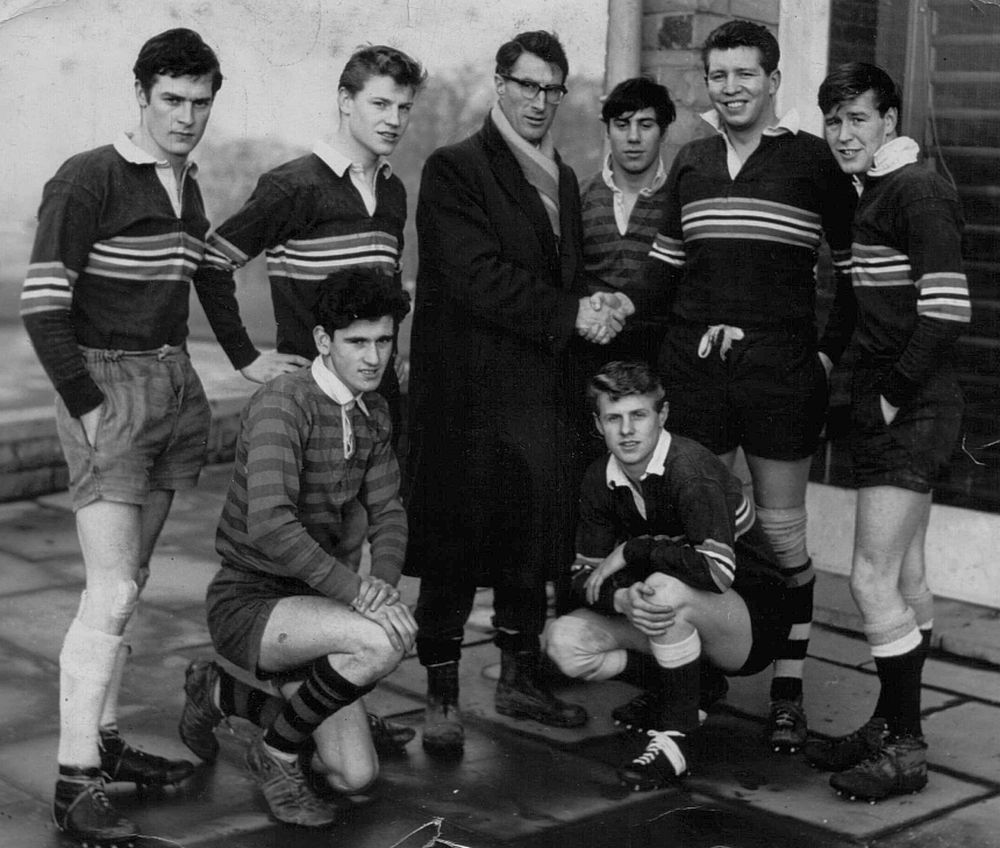 Back Row L-R: Sid Kenningham, Brian May, Mr Tate, Norman Tate, Peter Douglas, Terry Deeley
​Front Row L-R: Andrew Hudson, Albert Parkin
This is the Presentation to Mr Tate in the Year 1963-64, before he left HGS to to take up a new job at a large Rotherham school. Three years later he moved into Administrative/Pastoral work with a "Head of Middle School" appointment. The change of direction eventually brought him a Headmaster's position in a school with a Sports Specialism. He retired in the mid 1980s. ​
19. The Chemistry Exhibition School Year 1952-53
This exhibition took place in the original 1926 Chemistry Lab on the Top Corridor. The boys' playground is behind the camera position and the Dell is to the right. This room became Mr Boyd's Music Room when the new Science block was opened in 1956-57.
"I suspect the photo was taken in 1953. It was probably taken by Mr. Hamilton in the Chemistry Lab. It is a photo of the Lower and Upper Sixth Form chemistry pupils. The Upper Sixth students are Jim Stead, Pete Haverty and me. When we started in the Lower Sixth, Dudley Taylor (in the photo he is almost hidden behind Hodgson) was assigned to teach us Chemistry even though Mr Owen was the senior chemistry master. Dudley Taylor remained our teacher right through the Upper Sixth. He was not much older than us, almost straight out of university. But he was keen and pushed us hard (we were keen students). In our last year we were covering Chemistry which was above A-Level standard and he was setting us scholarship questions. I have always thought that it was largely due to him that Pete Haverty and I were able to win scholarships."
Geoff Graham​ 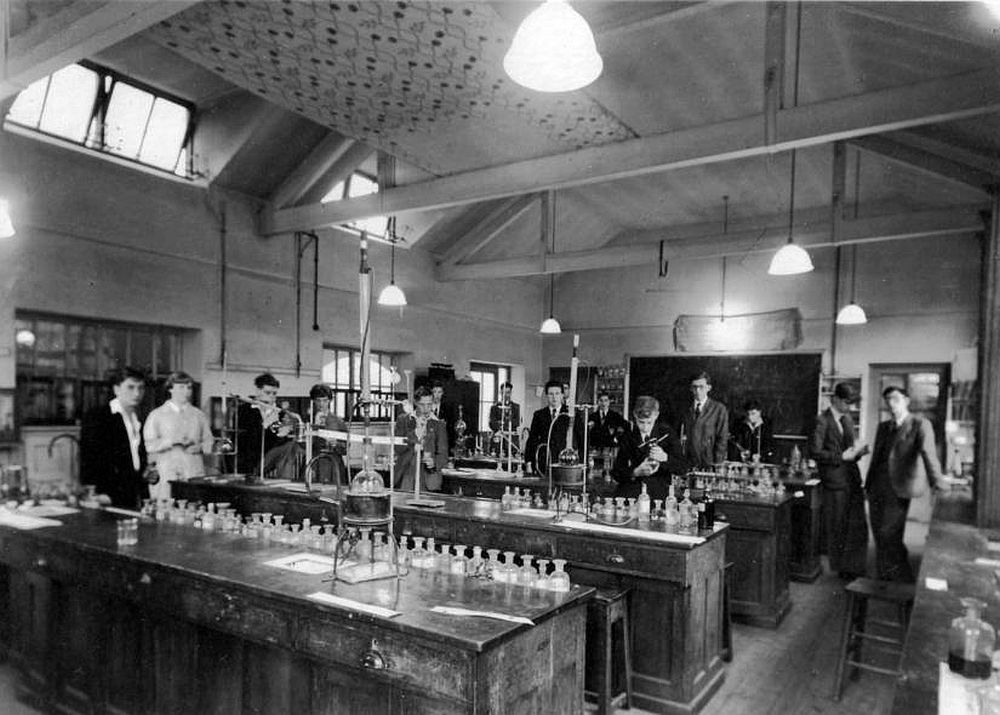 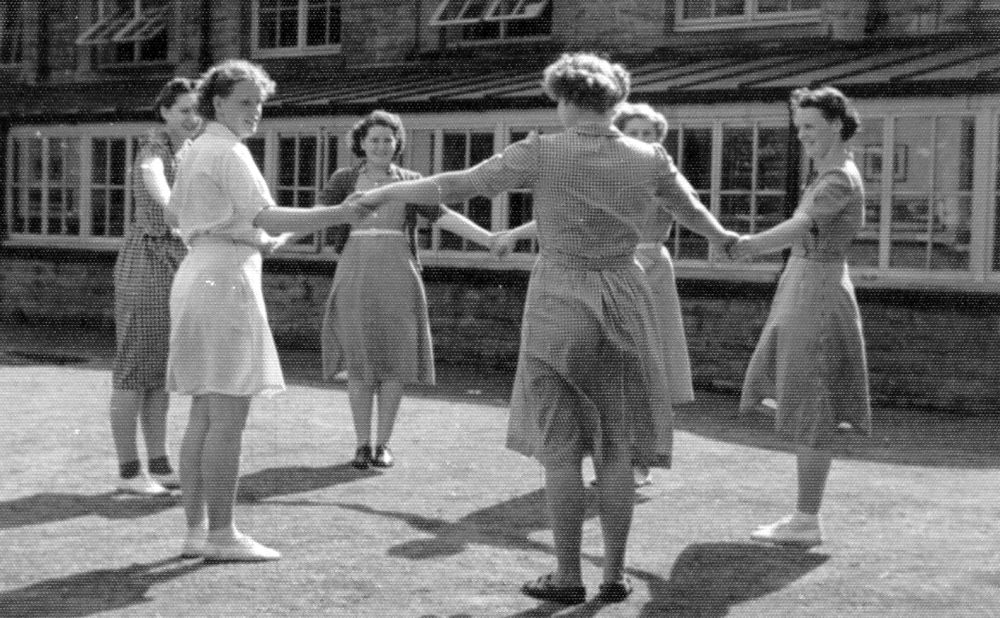 The photo was supplied by Irene Wright. Thank you.
17. Sports Day Winners 1944
This photograph shows the male HGS Physical Education teachers who were active from 1940 to 1967. The school closed at the end of the 1967 Autumn Term, when Mr Hamilton retired. Please note that Les Tate and Derek Wilkinson were also Former Head Boys of the school in the 1940s. 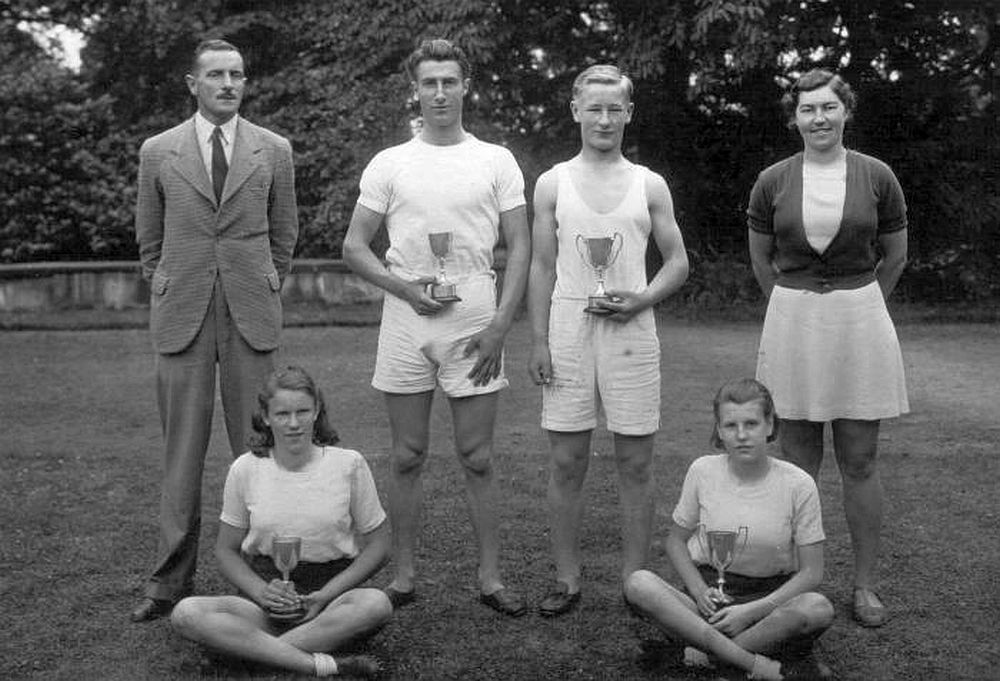 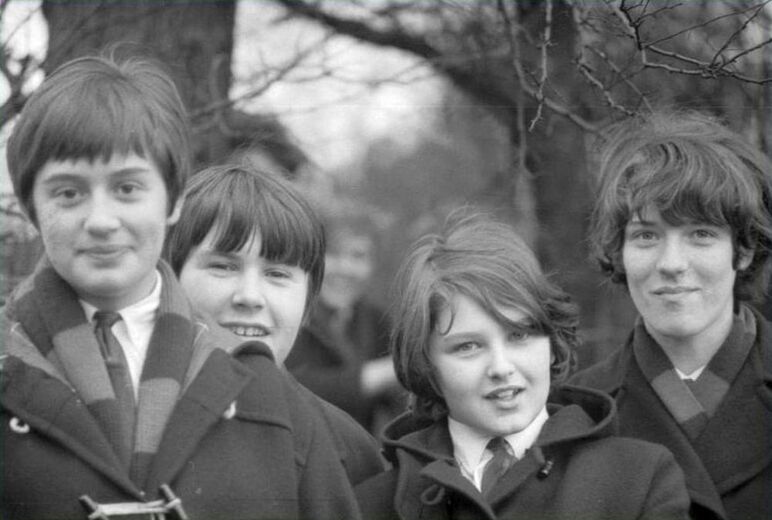 The names have come from: Helen Smith, Margaret Alison Croucher, Emma Peel and Dave McKenzie
L-R: Vivienne Horton (Guest), Anne Goodall (Price), Margaret Stonehouse (Holgate), Irene Whale (Talbot)
​Photo: Batey
15. Our Gang - School Leavers 1943
They were Prefects in 1942-43 and Marjorie Duckworth was the Head Girl. The photograph was taken on the steps in front of the Music Room at that time. 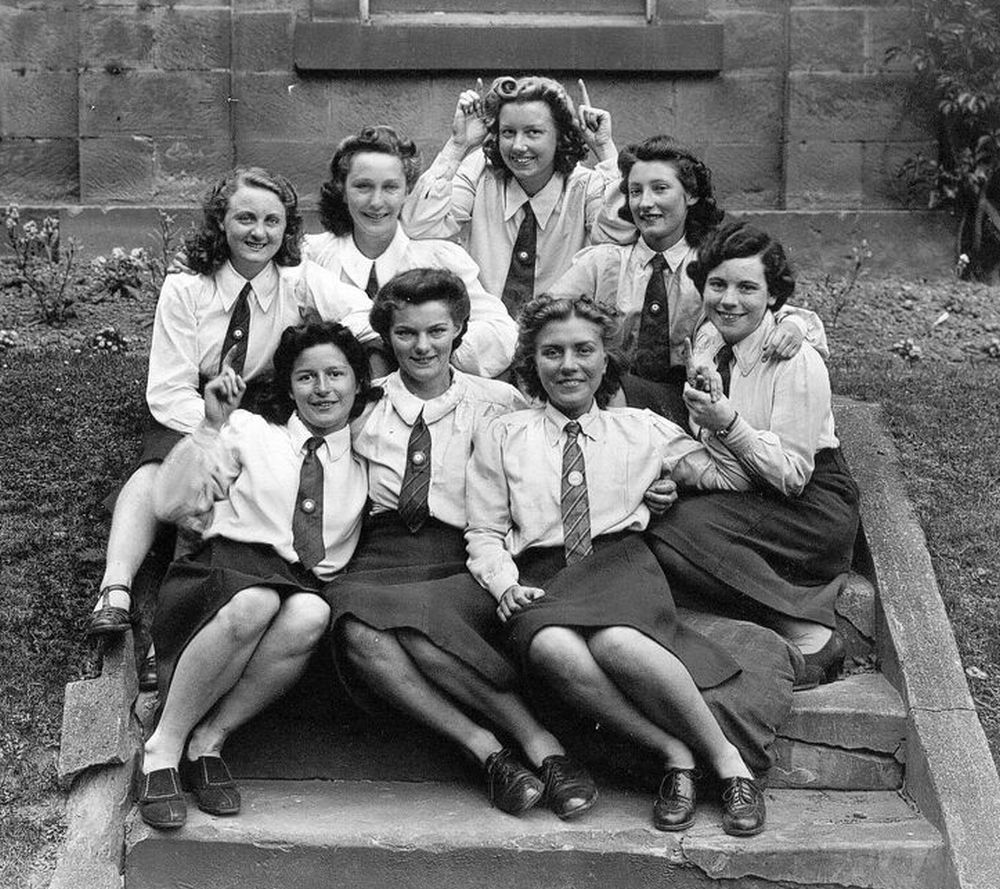 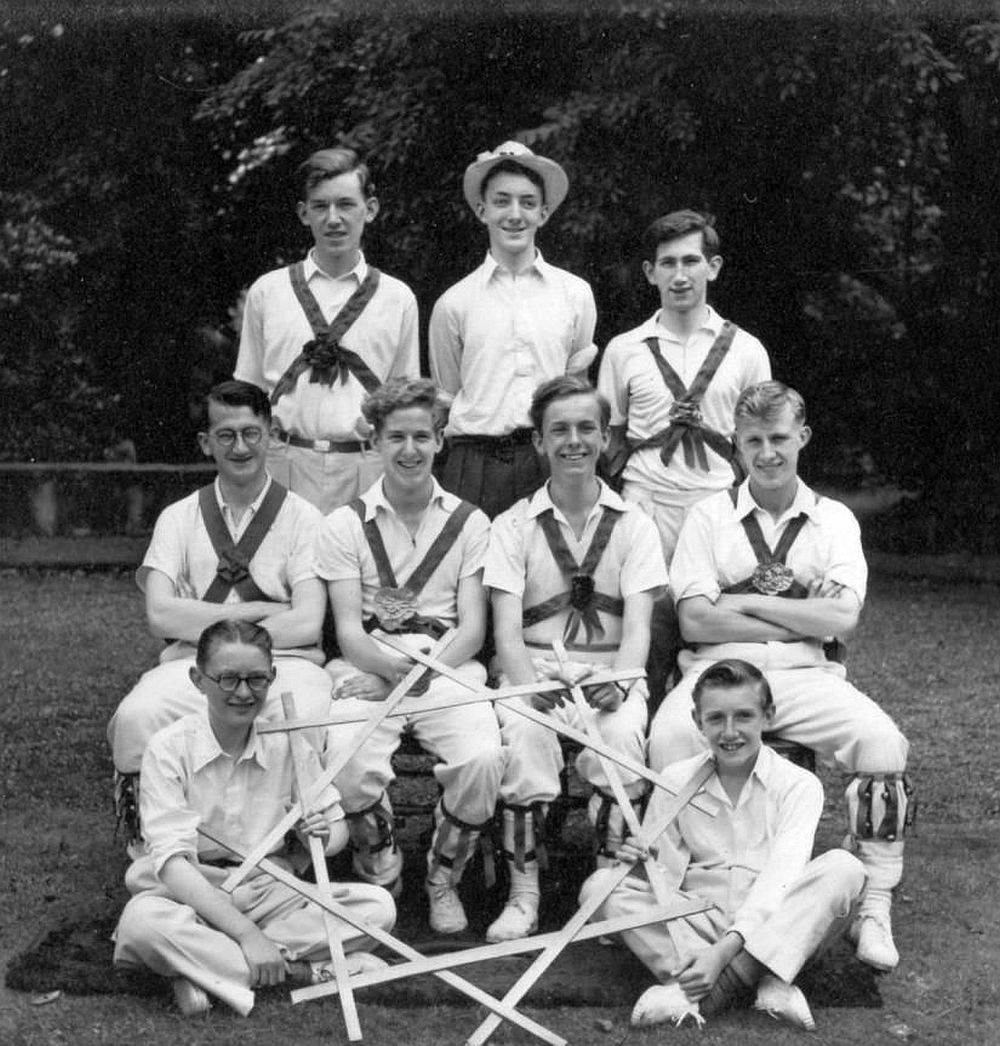 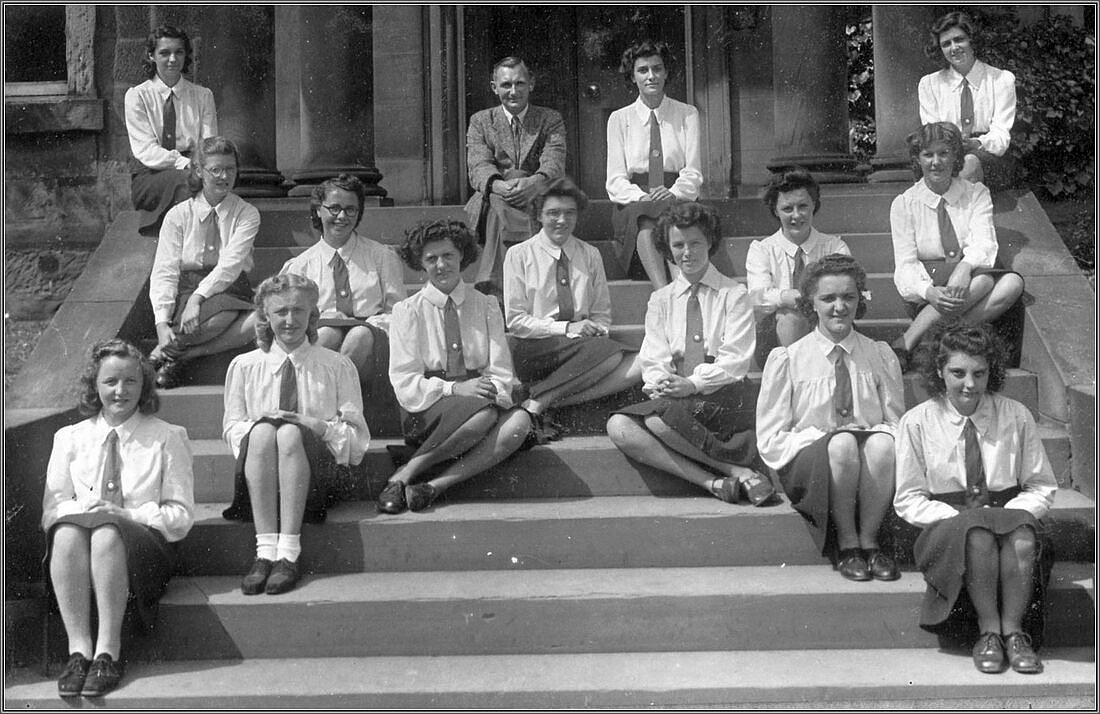 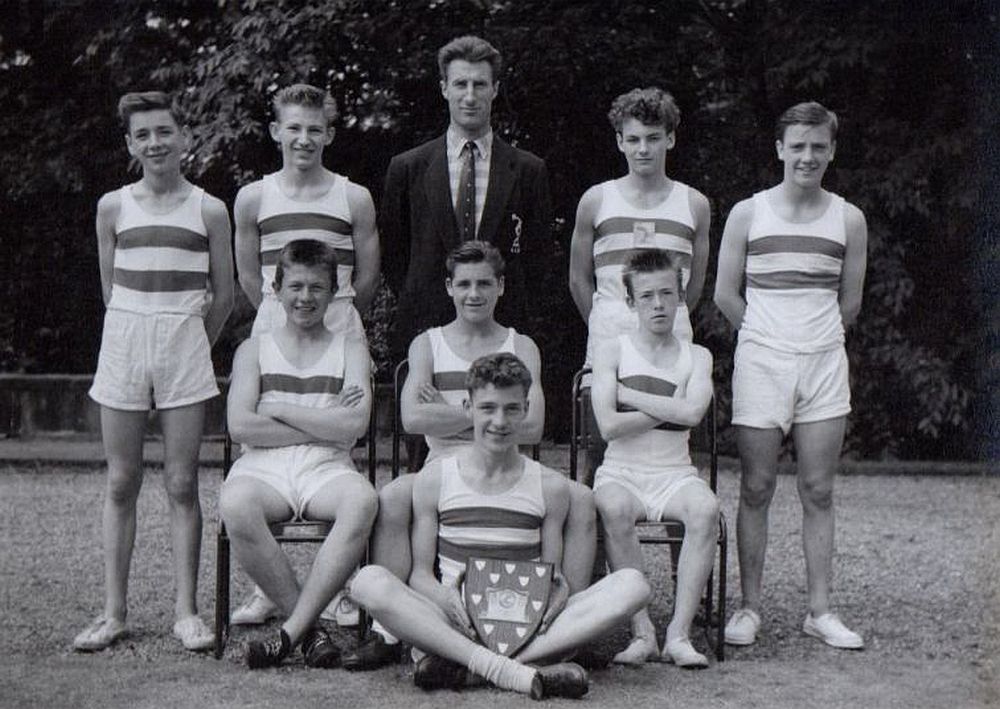 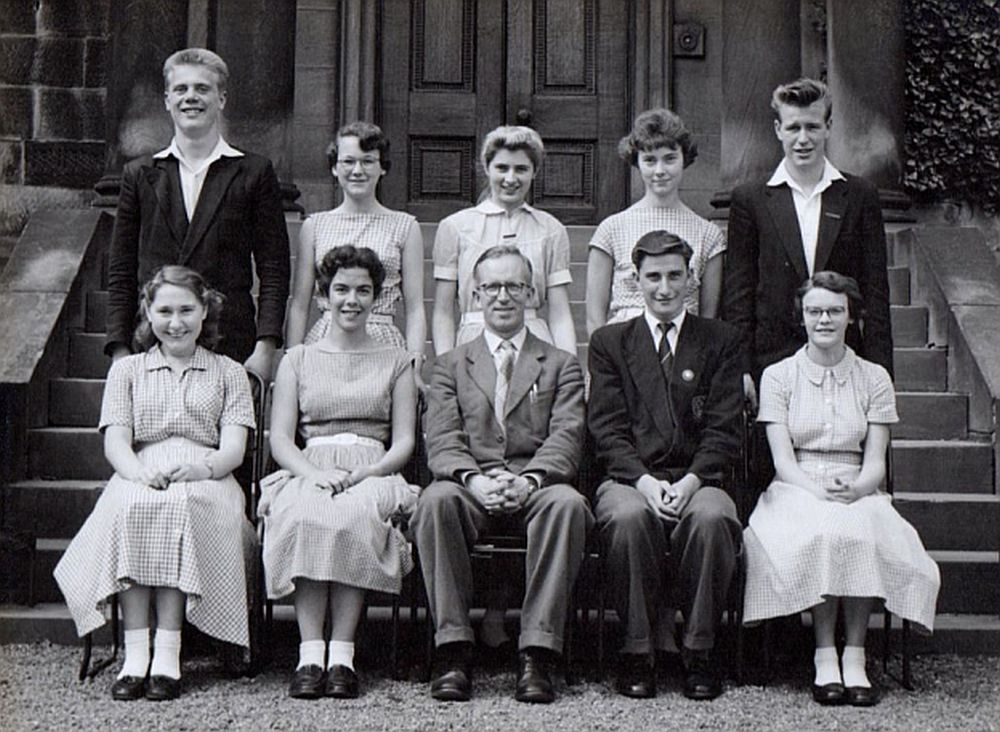 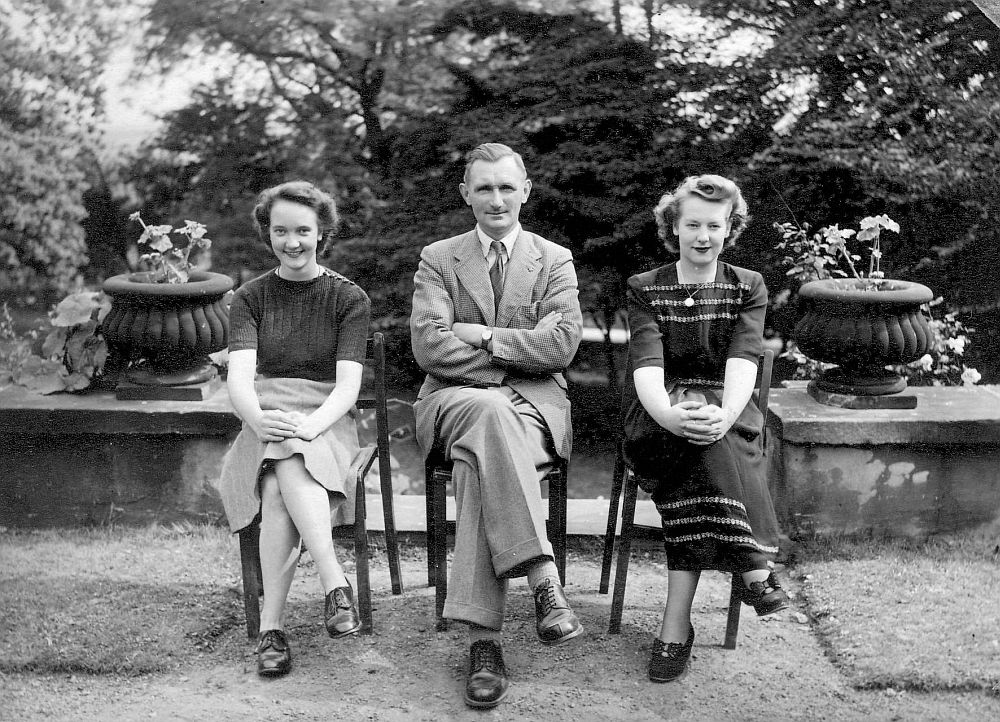 Photo from Marie Johnson and Gordon Clarke. Thank you.
Marie Johnson, Mr. Hamilton, Marjorie Oxley
8. Madrigal Choir 1949-50
Sadly Mr Combs died while he was the Art teacher at HGS. He died on the 26th February, 1956. He was a few months short of 34 years of age. He was my Art teacher in 1C during my first term at HGS. There is a tribute to him on the Staff page which was written by Mr Hamilton. Mr Burnett was the Religious Education master at HGS. 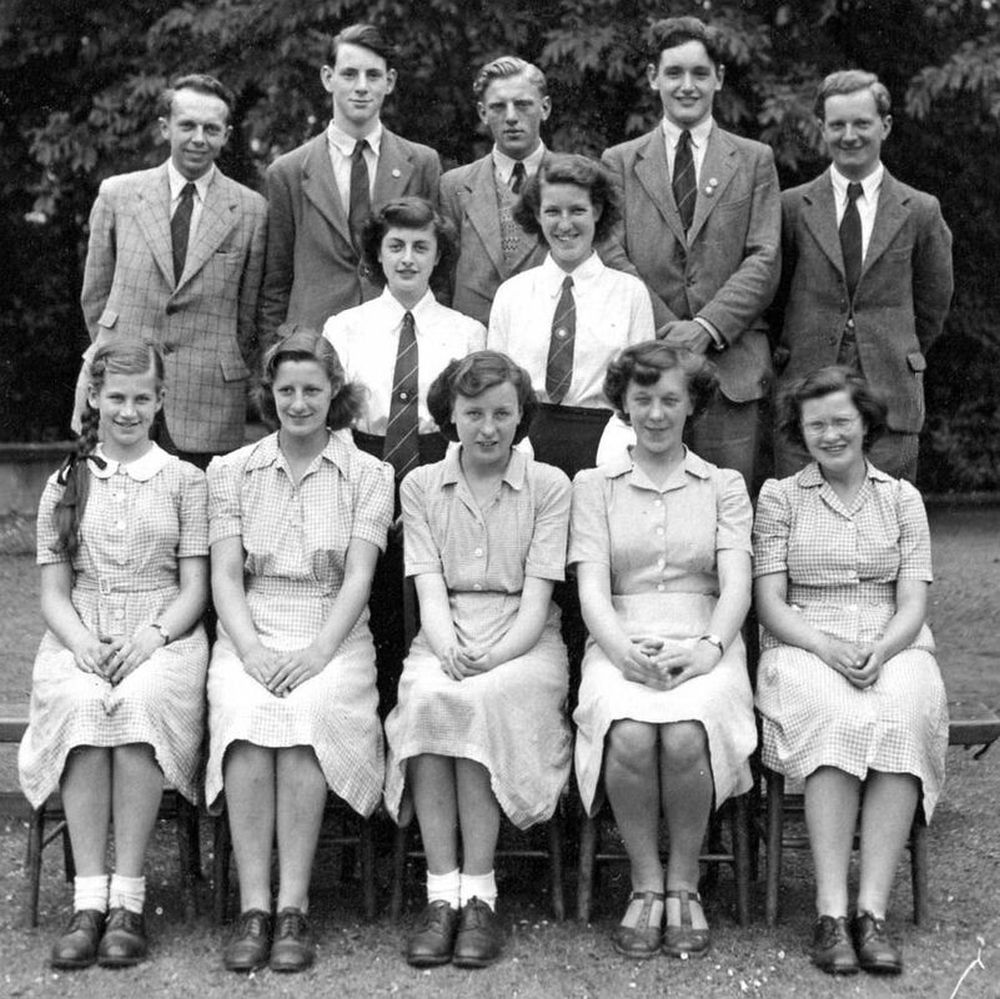 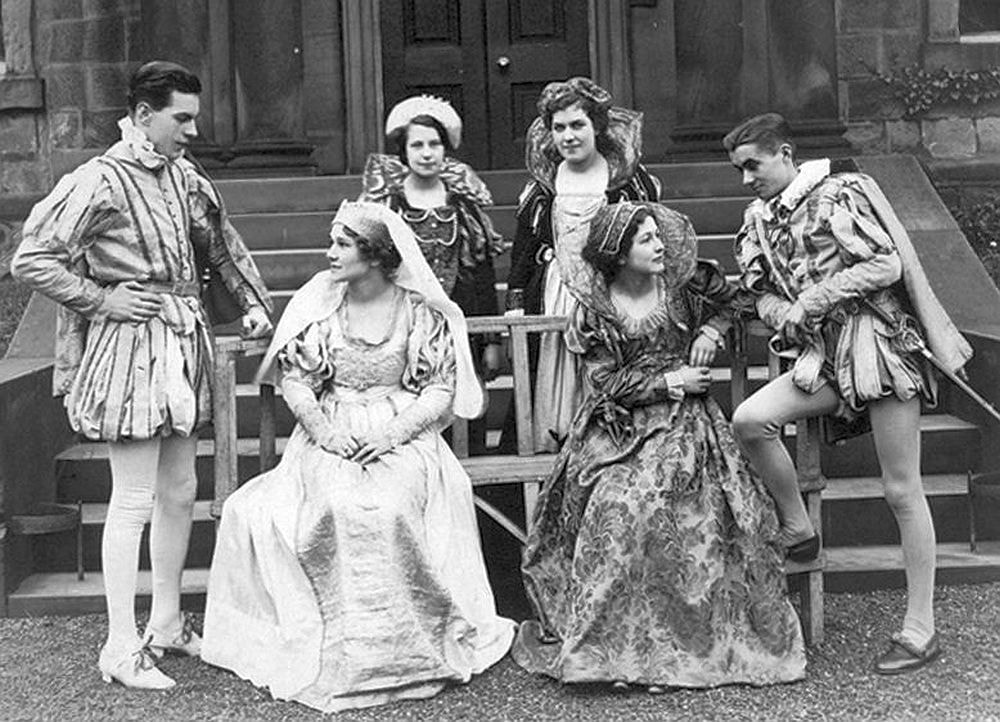 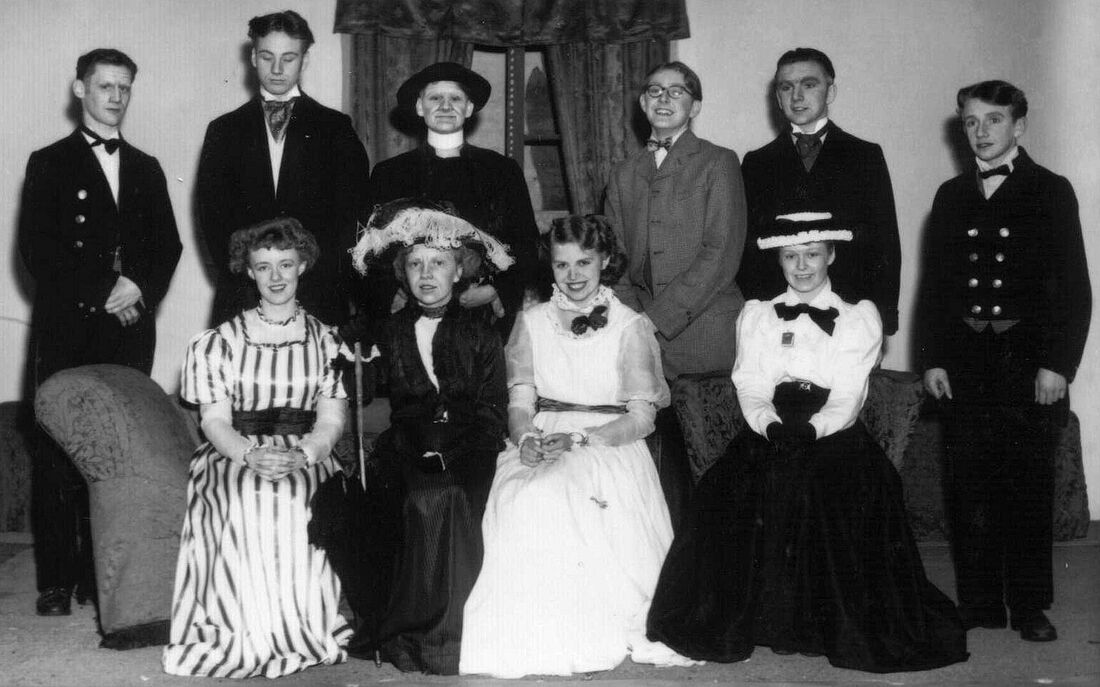 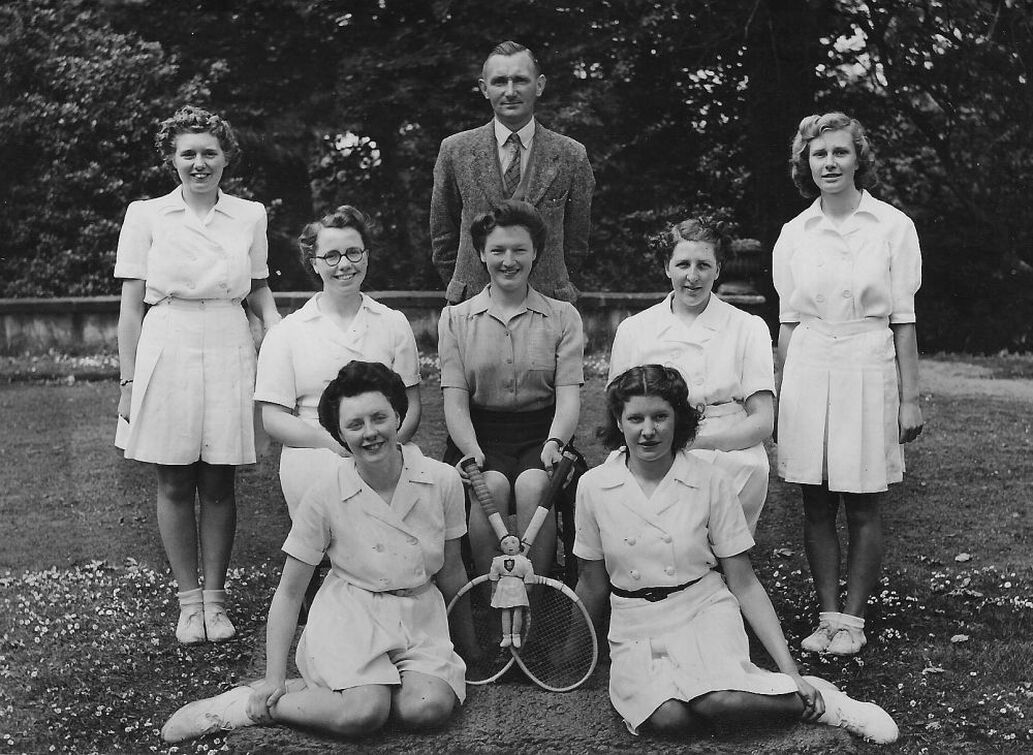 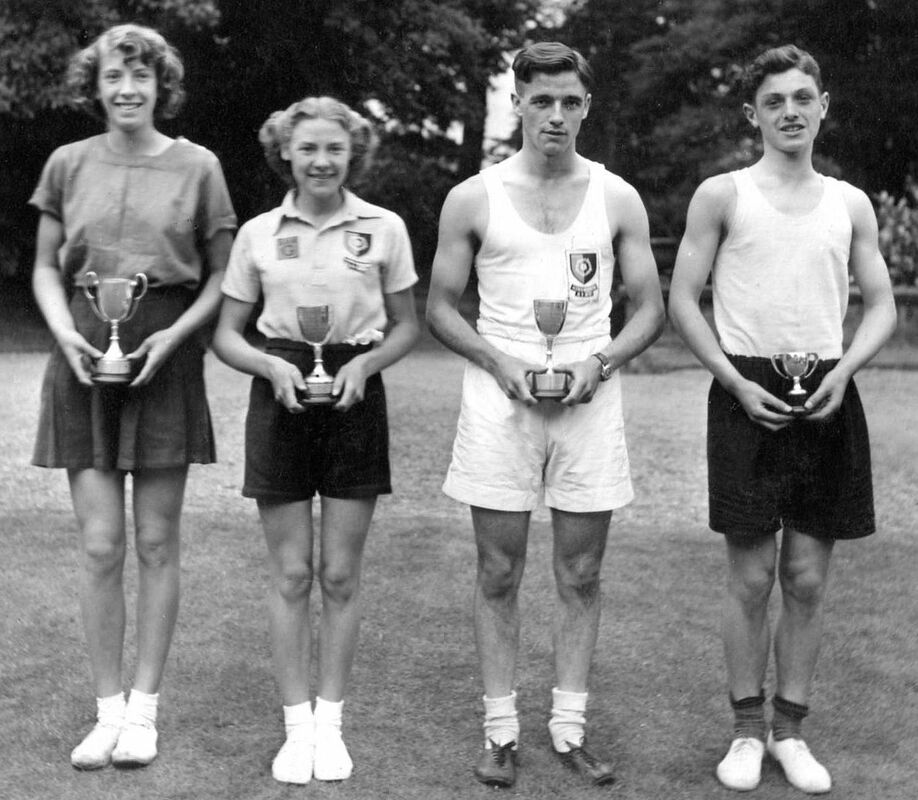 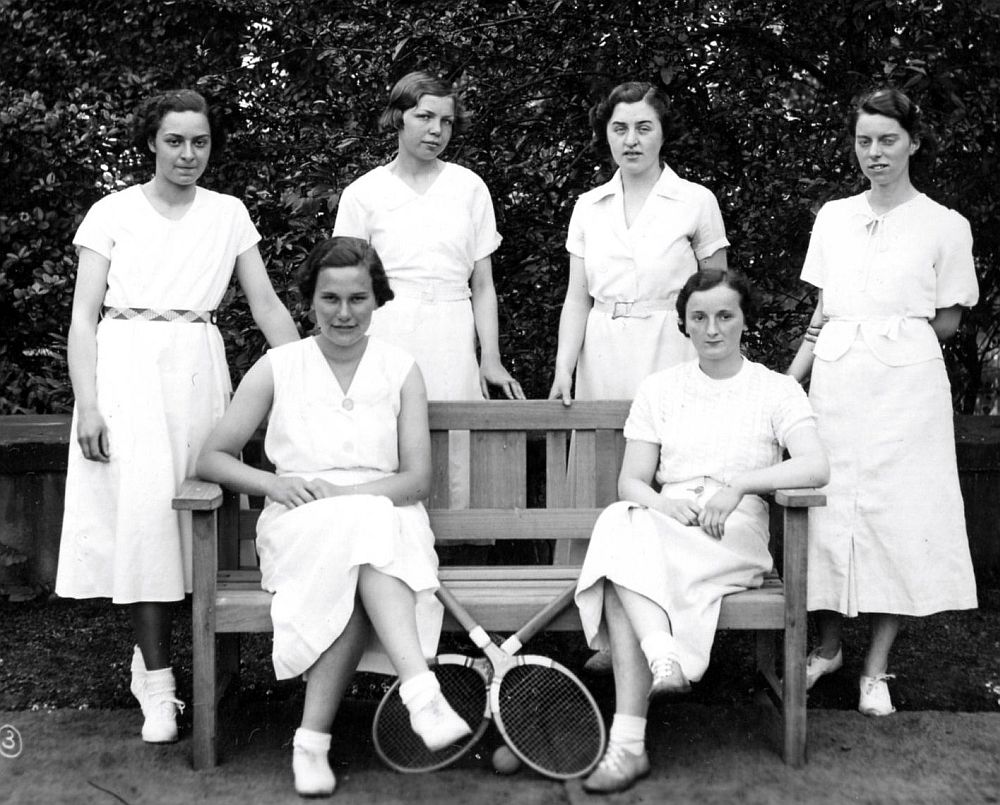 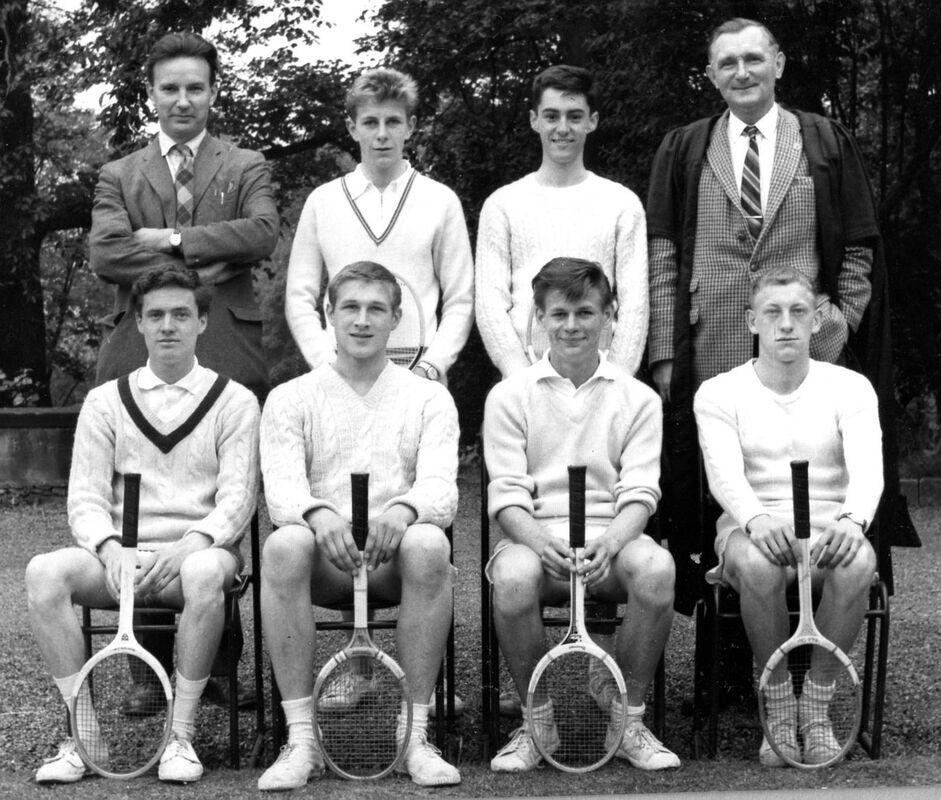 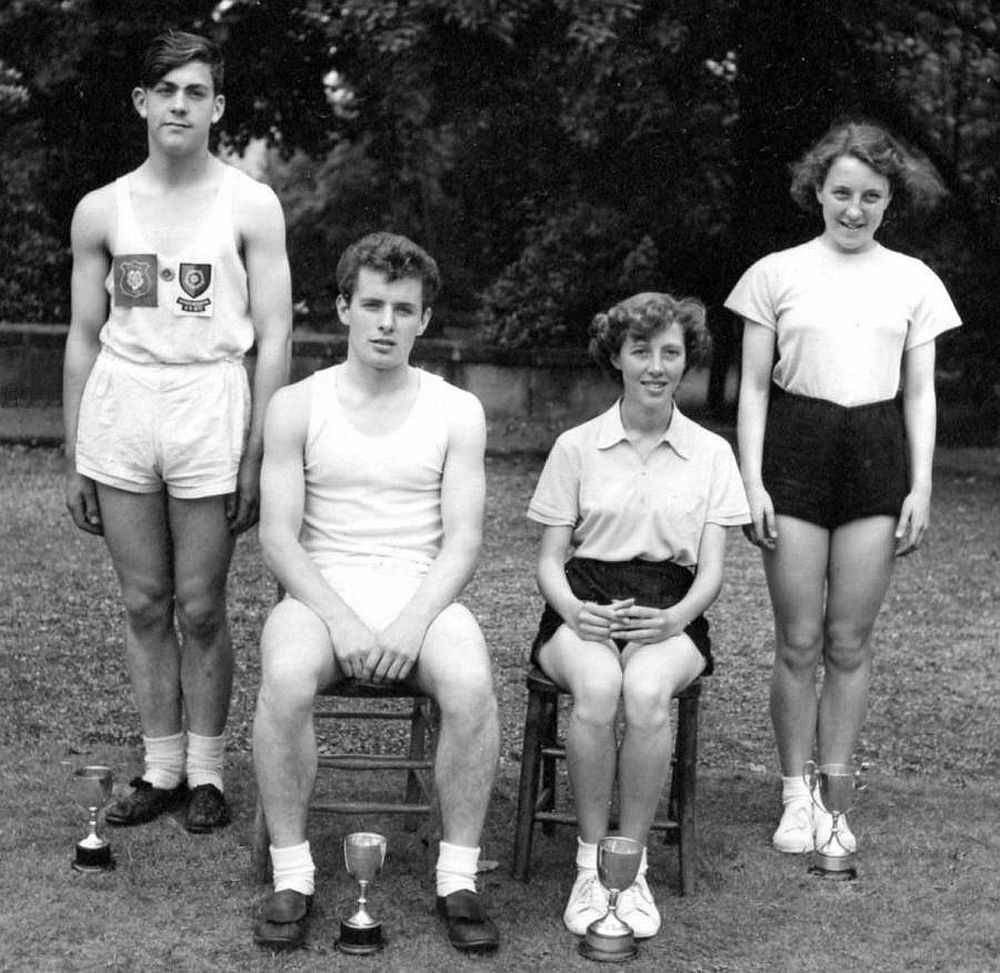